The Will to Believe 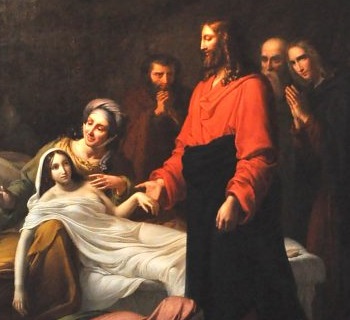 Christ said, “All that the Father giveth me shall come to me; and him that cometh to me I will in no wise cast out” (John 6:37). St. John Chrysostom comments: “It is no accident whether a man believes or not, and that belief is not the work of human cogitation, but requires a revelation from on high, and a mind devout enough to receive the revelation. Not that they are free from blame, whom the Father does not give, for they are deficient even in that which lies in their own power, the will to believe.” For Christ said, “He that believeth on me hath everlasting life” (v. 47).

Christ revealed this to His disciples: “And this is the Father’s will which hath sent me, that of all which he hath given me I should lose nothing, but should raise it up again at the last day” (v. 39). Thus, St. Augustine teaches: “By Him there is given also perseverance in good unto the end; which is given only to those who will not perish. Those who do not persevere will perish.”

Christ continued the revelation, saying, “And this is the will of him that sent me, that every one which seeth the Son, and believeth on him, may have everlasting life: and I will raise him up at the last day” (v. 40). Reflecting on this revelation, we can see why St. Augustine taught that there are two resurrections for the believer: a spiritual resurrection in this life, and a bodily resurrection in the next. He writes: “See how the twofold resurrection is expressed here. He who cometh to Me, shall forthwith rise again by becoming humble, and a member of Me. . . . But this is only the first resurrection. He alludes to the second when He says, ‘and I will raise him up at the last day.'”

Quotations from St. Thomas Aquinas, Catena Aurea: Commentary on the Four Gospels Collected Out of the Works of the Fathers, Vol. IV, Part I (Oxford: John Henry Parker, 1845).